We have found a treasure trove of old Cedar yearbooks from the school archives. These are extremely precious as they document the long, long way Cedar and Cedarians have come since the school was founded. The alumni was graciously given permission by the school to reproduce the class photos in these yearbooks (remember how we were herded under the hot sun to sit on chairs or stand on canteen benches to have our class photo taken every year?) for our alumni members and Cedarians graduates. 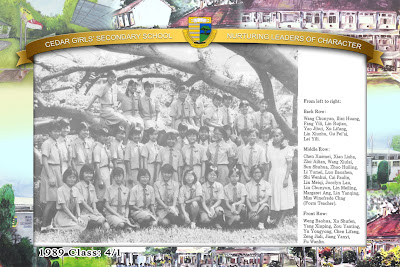 These old photos will be scanned in and mounted on hardboard with a photo stand. The background is taken from a collection of sketches of the old school - another precious resource because the architecture of the school today is not the same as before! Of course, you - and your classmates - don't look the same today too!
If you wish to keep some of your Cedar school memories alive, email us for your photo orders. Click on the pictures for an enlarged view of the photos. 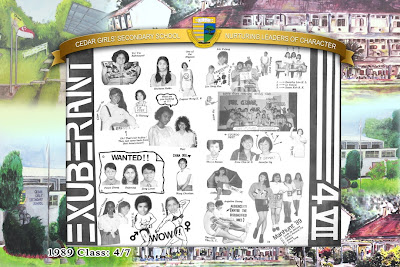 Posted by The Cedarian Alumni at 15:19 No comments: 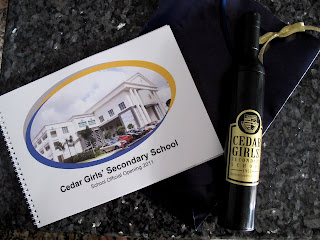 After leaving Cedar, we did not see each other until July 22, 2011. More than three decades later, there she was standing in the canteen watching me walk towards her (not intentionally, but I was heading in her direction anyway) and waiting to see whether I would recognise her. I stopped and for all of five seconds, I looked and then "ting!", lightbulb moment. G... H...! I yelled. S.. Y..! she screamed in returned. We high-fived several times, so amazed were we of our discovery of each other again and in Cedar. We whooped and talked so loudly - like vegetable sellers, but this was a reunion like no other. A former classmate who I remembered for her distinctive way of teasing you, did that vanishing act like every school girl in Singapore after the "O" levels. We pursued our own destinies until our paths miraculously crossed again - more than 30 years later.

The moral of this rather long-winded story? If you are seeking old, dear, Cedar classmates, going back to school is one of the best ways to do so. Ask A... who, somehow, managed to find more than 30 friends of hers who all attended the dinner held at the official opening of Cedar school on July 22, 2011. Yes, they whooped, hugged each other and talked loudly too. Familiar reunion scenes.

If you were unable to attend the dinner, click here for some pictures. You may be able to spot a familiar face!

Of course, GH and I exchanged mobile numbers and promised to see each other again - there is so much catching up to do. And, maybe, the school may provide yet another great excuse for a party and a reunion! I hope the principal reads this!
Posted by The Cedarian Alumni at 14:15 No comments:

Are you coming to dinner?

So, are you coming to dinner? The school and alumni are organising a big dinner in July and are inviting students, parents, alumni members and their friends to this most important occasion of the year - the official opening of Cedar Girls Secondary School after the completion of extensive renovations more than a year ago.

It will be a pretty classy affair. You will be served a four-course, halal, Western dinner (or vegetarian, if that's what you prefer). Dust off your smart togs and come, join in the fun in new, smart surroundings. If you've not been back to Cedar an era ago, take this opportunity to have a look. Email us if you are keen to party!
Posted by The Cedarian Alumni at 17:17 No comments:

So, who says we can't have another dinner? Rhetorical question, of course. We always have makans in Singapore! Preparations are swinging merrily along behind the scene and one that we (well, two alumni committee members, that is) enjoyed recently was food tasting. We were invited to take part by the school and it was so enjoyable. We ate and bit the hand (the caterer's hand, that is) that fed us by being picky, picky, picky. After all, there are some 500 guests who will be eating the food we picked and we really want them to leave with happy stomachs. More news coming up on this event. 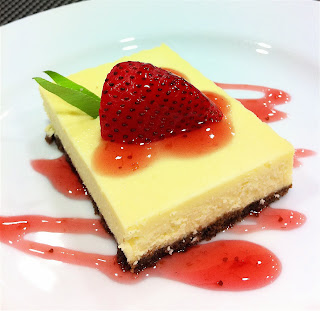 Posted by The Cedarian Alumni at 09:33 No comments:

We have some new faces in our executive committee 2010-2011! We warmly welcome Ann Leong, Tan Hsueh Mei, Mabel Yap and Sharon Cheam and hope they will enjoy the experience of working with the rest of us.

The one big event to watch out for this year is the school's opening (or is it re-opening?) after the massive renovations it underwent. We will have more news on this July event for you soon! It's J.U.L.Y. folks!
Posted by The Cedarian Alumni at 16:49 No comments:

Oops! The beauty workshop was not the last alumni event of the year - it was second-last (well, the word "last" is there right?). Anyway, THE last event was Orientation Day on 23rd December. We were given a well-positioned table in the canteen to sell the Cedar towels.

Sales went very well and we had some lovely support from the students. See the cheerful pictures!

Posted by The Cedarian Alumni at 20:51 No comments:

Life got in the way!

Okay, okay, so we have not posted for a few months. You probably thought this blog died. No, no, not really, life just has a way of getting into your face and updating this blog was, hmm, shall we say, put on the back burner. However, 2011 has come and before it's gone, we have to get in a few new posts of course!

Our last event for 2010 was a beauty workshop on the TCM (traditional Chinese medicine) way to beauty. For this, we had the experts on hand from Touche to give us a talk and hands-on demo of the guasa facial technique on 20th November. We were served a delicious lunch at the Guild House at Suntec and afterwards it was show time!

Feedback from the attendees was that they found the talk extremely interesting and almost everyone signed up for a trial facial since it was offered at a giveaway price! Touche also gave out complimentary vouchers and free wax hand treatment to all. See all pictures here.
Posted by The Cedarian Alumni at 18:04 No comments: 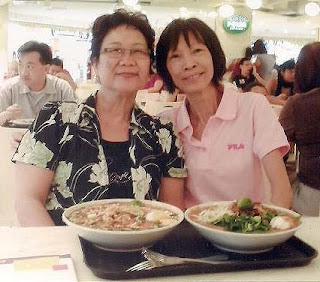 What a meeting! After more than 45 years, these ex-school mates from Cedar met up. A last-minute decision by Alice Kong to fly to Singapore from Hong Kong last December, enabled her to reunite with six of her former classmates: Catherine Chia, Patricia Goh, Cheng Choo, Mah Yok, Joyce Wong and Rosalind Ang. Except for the last gal, the rest are in these two pictures. Alice (left) and Catherine are in the top picture. 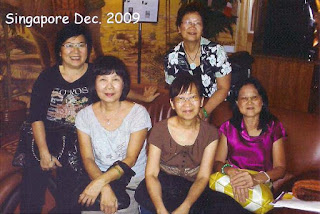 Alice emailed the alumni and offered these priceless pictures for our website! Thank you Alice. 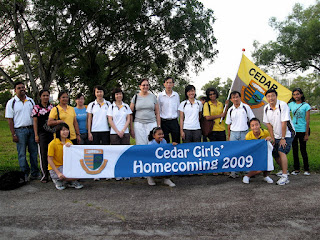 The morning was bright, beautiful and best of all - dry! On New Year's eve, we gathered on a hillock in Bidadari (is the place still called a cemetery now that all the graves are
gone?) for a ceremonious walk back to the old/new Cedar school. Some 1,000  of us - students, ex-students, teachers, alumni and SAC members - began the walk after several short speeches and a weak blare of the horn. It was more splutter, splutter when Mrs. Ou Yang pressed the button, and we had a good laugh. Then it was on, on, a 1.2 km walk for some, a one km walk for others depending on which route one chose. The idea was to meet at the gates of the school and together march in heading towards the hall. A welcoming committee of pom pom girls, drumming parents and two cheering lines of students made the event noisy, colourful and exciting! If you missed the walk, there are pictures here.
Posted by The Cedarian Alumni at 10:56 1 comment: 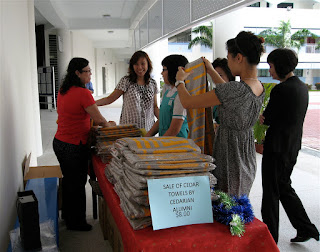 Here we were, the five of us from the alumni committee trying to sell our towels to the incoming new Cedar students. Some harried parents avoided our eyes and stepped quickly out of the way when they saw one of us approaching. Others were really nice and when they heard that we were trying to raise funds for scholarships for needy students, they bought a towel or two without hesitation. Hard work and loads of perspiration on our part and we sold almost 150 towels in that few hours. Hooray! Next sales day will be 31st December, when the entire school, parents and ex-Cedarians will be participating in the school's homecoming. If you're joining in the fun, don't forget to visit our stall and do your bit for Cedar's needy students!
Posted by The Cedarian Alumni at 17:41 No comments:

The Cedarian Alumni
Singapore
Here is our virtual meeting place for graduates of Cedar Girls Secondary School to keep in touch with events in the alumni and the school. Read about our Mission and Join the alumni! We also have a news flash messaging service to update group members on the latest happenings! (This site is best viewed with Firefox and Safari).